You are here: Home / SEO / How can Google+ Help My Website?

When Google rolled out Google+ in 2011, it was massively dismissed and mocked as a lame Facebook knockoff. It’s come a long way. Can Google Plus help my website? Yes!

It’s an essential tool to increase traffic and engagement.

Your listing on Local can be particularly powerful directing your neighbors to your business.

Here’s an example of an Authorship result on a search page:

Here’s an example of a placement in a Google location-based search.

(The guy above on the right is our client, Billy Lester of pianolessonsyonkers.com.) 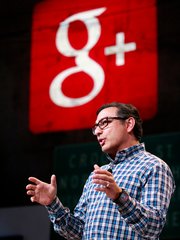 The New York Times published an article today deriding Google+ as useless (except for Google’s own interest) and invasive, but concluding that Google+ has the leverage to impose itself on the internet. The leverages put in place giving advantage to Google+ users in search are now a factor to be reckoned with, and it would be unwise for a security-obsessed user to rule them out or ignore them.

Internet users are already being tracked by cookies placed by innumerable websites. Social media provides valuable information to advertisers. For them, highly specific targeting provided by Google, Facebook  and other social media is desirable and cost-effective. Social media companies have developed ingenious ways to learn about their users for the benefit of their real customers—their advertisers.

Users are sensitive to privacy concerns, especially after Edward Snowden blew the lid off of NSA surveillance last year. The Times fans the flames of paranoia with this article, while overlooking the benefits of Google+ to content creators and website owners.

Although Google+ users habits are different than Facebook’s, it’s not supposed to be a Facebook substitute. For a user looking for really useful content in any specific area, Google+ beats Facebook hands down.

Speaking from my own experience, after I began using Google+ communities and other discovery tools such as StumbeUpon and Pinterest, my time spent on Facebook has plummeted.

Neil Patel is a web marketing guru.He posted this infographic with useful information about Google+ users.

Why delay? Initial consultation is on the house!